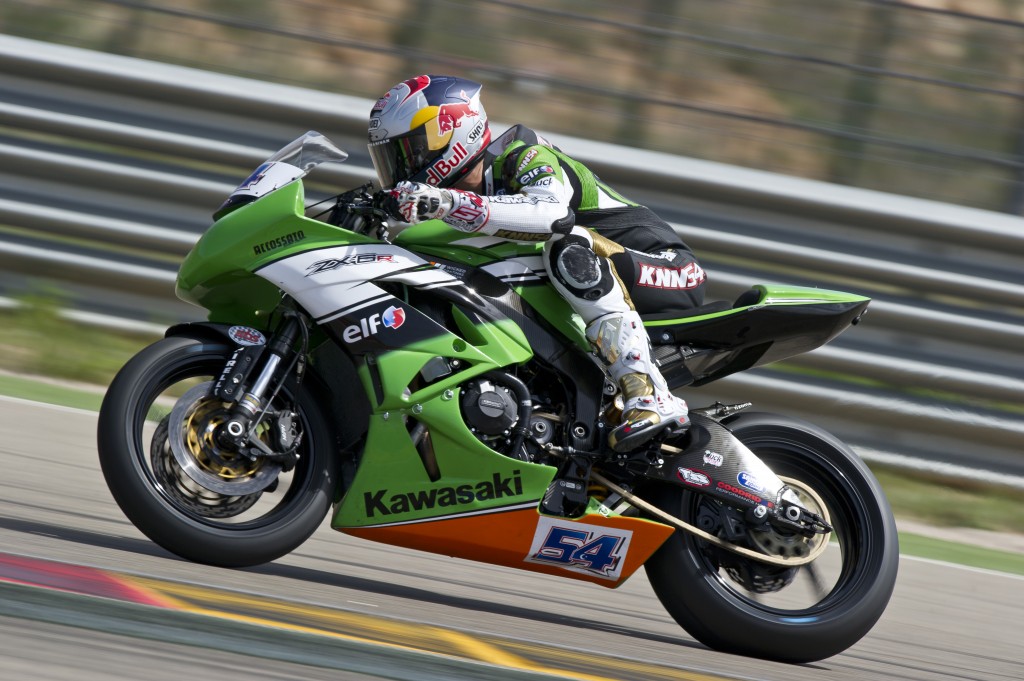 Today has been a difficult day for both riders and crew with both bikes suffering technical problems in the first session.

Kenan managed to put in three laps during FP1 before suffering a technical issue at turn 10 that forced retirement to the pits. Kenan finished FP1 with a best lap time of 2:05.346 , 2.517 seconds behind DMC-Panavato Yamaha’s Kev Coghlan who finished fastest in this session.
The team worked tirelessly to resolve the technical issue for FP2 and Kenan took to the track feeling positive about improving from the previous practice session. After a successful 14 laps of the 5.344km Motoland Aragon circuit, Kenan put in a fastest lap of 2:03.173 which was over 2 seconds faster than his best lap time in FP1. This left him fifth overall, 0.712 behind Phillip Island race winner Jules Cluzel who put in the fastest lap of this session. Kenan has one final free practice session tomorrow morning and the team are confident that further improvements can be made before qualifying begins at 15:55 local time.

Fabien’s luck in FP1 was similar with only five laps completed and a best time of 2:04.393 leaving him 22nd due to issues with the bike electronics. Improvements were made to the electronics system before FP2 and Fabien was clearly more confident and happy with the way the bike was working. He put in a best lap time of 2:01.511 over 13 laps, almost 3 seconds faster than his FP1 time, making him the 6th fastest EVO machine on track. Track time for Fabien begins at 09:45 local time tomorrow with free practice 3 before Superpole begins at 15:00.

“Today was frustrating for me, since Phillip Island I have not ridden my bike and I was really hungry to get on and ride but immediately we had technical problems. This meant I missed most of the first session. I was hoping this afternoon I could do some laps and get my rhythm around this circuit and I started to improve step by step. I finished 6th and I can not say that it is a good result but I think I can say it was good after everything that happened. Tomorrow, for sure, is the day to go faster.”

“I was feeling frustrated this morning as we had an issue with the electronics. I was looking forward to riding the bike this afternoon as I was confident the crew could improve things for me before the second session and they did not disappoint me. I was happier on my bike in this afternoon’s session and put in some good lap times. I am in a better position for tomorrow and I am excited to get back out on track on my Kawasaki ZX-10.”

What our clients say about us

Hi, Finally I have fitted the coated parts to my VW Beetle dashboard. Here are some photos, I think they…

When you visit any web site, it may store or retrieve information on your browser, mostly in the form of cookies. This information might be about you, your preferences or your device and is mostly used to make the site work as you expect it to. The information does not usually directly identify you, but it can give you a more personalised web experience. Because we respect your right to privacy, you can choose not to allow some types of cookies. Click on the different category headings to find out more and change our default settings. However, blocking some types of cookies may impact your experience of the site and the services we are able to offer.

These cookies are necessary for the website to function and cannot be switched off in our systems. They are usually only set in response to actions made by you which amount to a request for services, such as setting your privacy preferences, logging in or filling in forms. You can set your browser to block or alert you about these cookies, but some parts of the site will not then work. These cookies do not store any personally identifiable information.

These cookies allow us to count visits and traffic sources so we can measure and improve the performance of our site. They help us to know which pages are the most and least popular and see how visitors move around the site. All information these cookies collect is aggregated and therefore anonymous. If you do not allow these cookies we will not know when you have visited our site, and will not be able to monitor its performance.

These cookies enable the website to provide enhanced functionality and personalisation. They may be set by us or by third party providers whose services we have added to our pages. If you do not allow these cookies then some or all of these services may not function properly.

These cookies may be set through our site by our advertising partners. They may be used by those companies to build a profile of your interests and show you relevant adverts on other sites. They do not store directly personal information, but are based on uniquely identifying your browser and internet device. If you do not allow these cookies, you will experience less targeted advertising.

These cookies are set by a range of social media services that we have added to the site to enable you to share our content with your friends and networks. They are capable of tracking your browser across other sites and building up a profile of your interests. This may impact the content and messages you see on other websites you visit. If you do not allow these cookies you may not be able to use or see these sharing tools.