The one regret I had after ordering my Jaguar XF Sportbrake in 2014 was not specifying  the walnut burr trims – not to everyone’s taste, but for me this would have been a nod to the tradition of the marque. But at an additional £450 and after blowing my budget on lots of other options I hadn’t budgeted for I ruled it out as one indulgence too far.

The ‘flat’ satin redwood trim supplied as standard in the car always disappointed me and when you consider that you spend your entire driving experience staring at it I decided to do something about it. I contacted Jaguar to ask for a quote to supply and fit burr walnut trims for the door panels and various pieces in the cockpit. Parts and labour?… £2000. Not an option.

So I started trawling ebay for the correct trim set, with a nice pattern/shade, in very good condition and at the right price.  Suffice to say this was a non-starter. There were bits and bobs but the unique thing about real walnut is just that – it’s unique. I didn’t want a set of trims that didn’t match. Then one evening (like many other petrol-heads) I found myself watching an episode of Wheeler Dealers (for the umpteenth time) where Mike bought an horrendous customised Range Rover and wanted to replace the garish electric blue trim panels with carbon fibre.  The cost was obviously prohibitive so he looked to a new technique of water-dipped graphics for a solution.  It occurred to me that maybe it might be an option to get my trims water-dipped in a walnut film?

I looked at a dozen or more companies specialising in this kind of treatment, and even entertained the idea of buying some film off ebay and trying a DIY job in the bath! ( I dismissed that idea pretty quickly). Wicked Coating’s website stood out because (a) it had a picture of Mike and Edd on the homepage (what’s not to like?) and (b) it had by far the widest selection of films to browse in the various (and extensive) galleries. I spotted one item in particular that had been coated in a ‘dark walnut’ film, and it looked like exactly the shade / pattern I wanted.

So I made my first contact with Wicked Coatings, on 5th March 2017 by filling out the simple on-line quote form on the website. I received a comprehensive quote and email with information about the process and what to do if I wanted to proceed from Wicked Coating’s Director Lyle Meikle within three days. The figure quoted was more than reasonable so I set about sourcing the last bits of trim I needed as cheaply as possible.

After a few weeks  I found a set of the correct door panel trims, in a gorgeous dark burr walnut pattern, in great condition. They were cheap at £60 although they did have to be sent from Lithuania. Great!  All I had to do now was ask Wicked to dip the remaining trip in a pattern to match! I eagerly contacted Lyle again with a photo of one of the door trims and asked him for a revised quote based on the remaining trim panels and asked him to source a ‘good match film’. Lyle replied a couple of days later and I was gutted that he advised that they were unable to identify a suitable film for a match and were therefore not able to assist.  I could either continue as planned (and have the beautiful Jaguar walnut panels dipped in fake walnut (the irony was unbearable) of forget the whole idea.

Lyle and I exchanged emails over a few days and I suspect he realised how keen I was to find a solution, so he advised that I sent the trim to the company together with one of the genuine walnut trims, and they would see what they could do. On the 26th April I received an email from Lyle – they had been working on a solution to get the best match to my trims they could find and included a photograph of my trim panel against a test design. It looked fantastic and I immediately gave the go ahead for the work to be done. 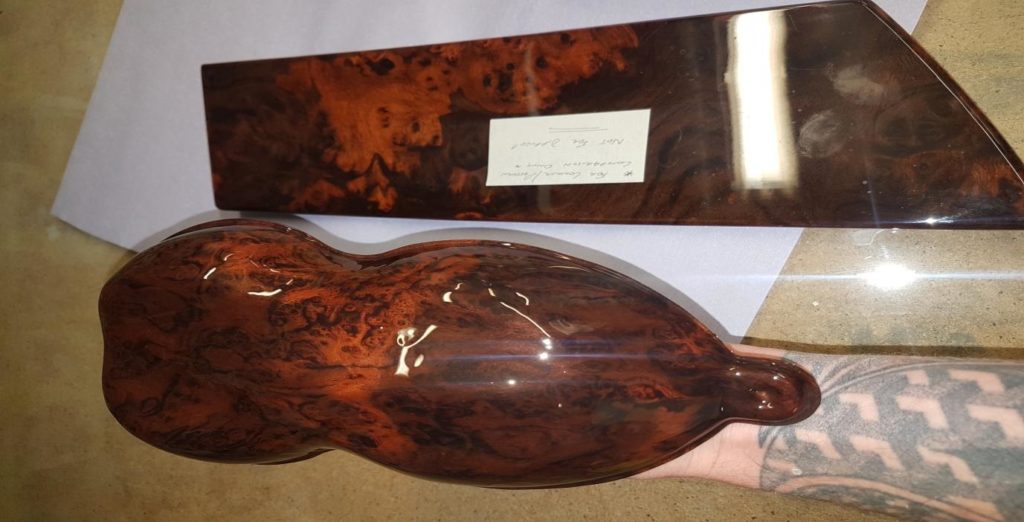 I received a call from Wicked Coatings on the 8th May to say that all the trims had been completed and coated in a deep gloss finish. I paid over the phone that evening and was assured that the trim would be with me the next day. And it was; the courier arrived in the afternoon and I was stunned at just how good the trim looked, how well it matched the original piece and the amazing quality and attention to detail that had gone into this. 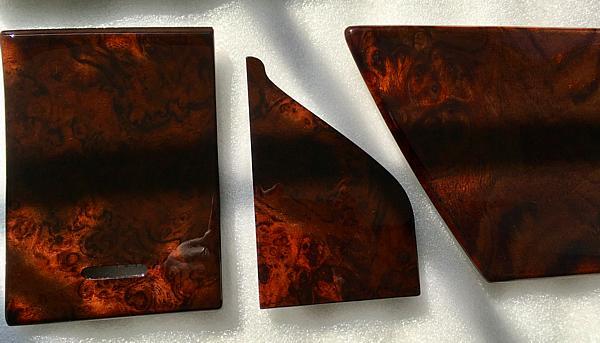 The orginal Jaguar walnut trim piece is the one on the right in both photographs. If you didn’t know it you would be very hard pushed to realise.  I immediately set about fitting the trim to the car and it was evident that there was no overspray, no ‘gloopy drips’ of clearcoat fouling any of the shutlines etc. It just fitted perfectly and the impact was stunning. 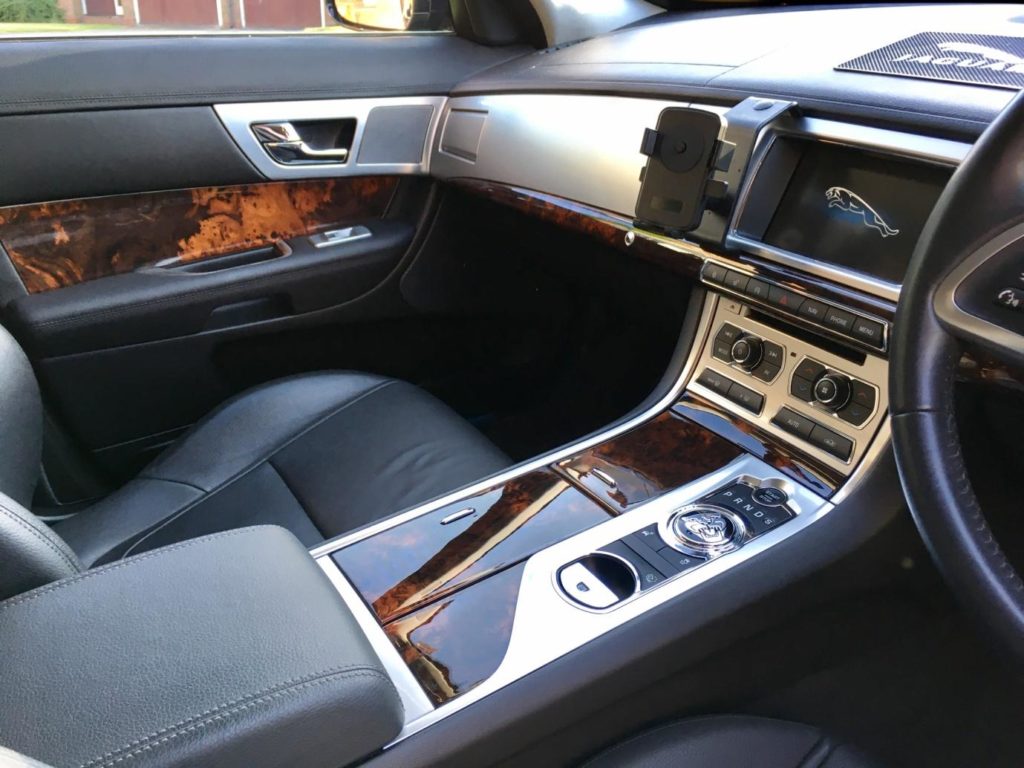 It was then that they  explained that in order to achieve the finished product they had had to come up with a bespoke solution involving the right shade of base coat, two different wood effect films overlaid and detail airbrushed in before the deep glossy coats of lacquer.  I was impressed that rather than stick to the “really sorry but we can’t match that” approach, the company found a way to replicate the original trim to such a standard that you would never know it was not all cut from the same tree. 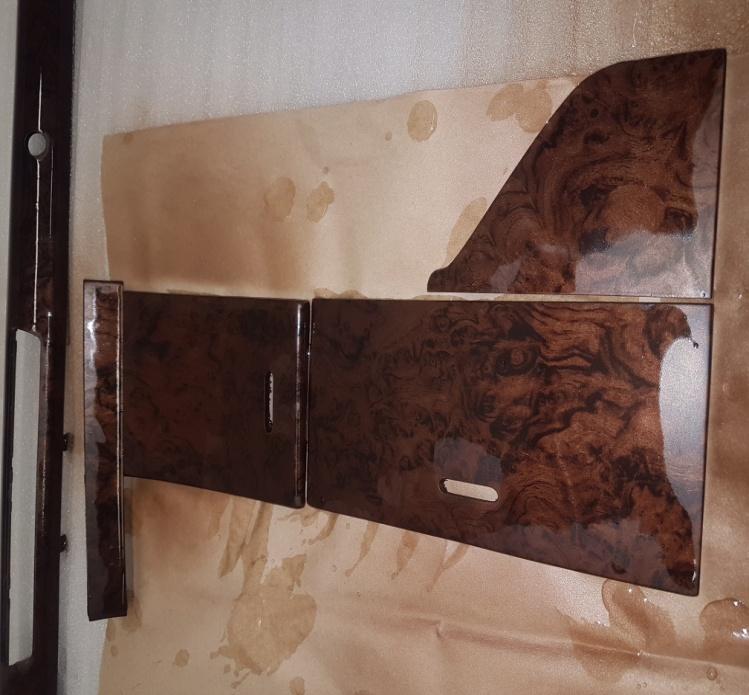 The inside of my car has been transformed and now oozes with the look of luxury that modern cars (even newer Jags) just don’t seem to pull off anymore.  I was so delighted with the outcome that I emailed Chris and Lyle from Wicked Coatings and sent them a photo. My son is a Design Engineer for JLR and he was amazed at the quality and likened it to the company’s flagship XJ model.

I’d better make clear that prior to this commission I have had no dealings with Wicked Coatings and I do not know anyone employed by the company. Furthermore I have no incentive to write this testimonial other than I would say it is absolutely the right thing to do when a company goes out of its way to provide a bespoke service for a customer. I would commend the services of Wicked Coatings to anyone – and have already shared my experience with a number of online car forums. And after all, if they are good enough for Mike ‘n’ Edd ….

When you visit any web site, it may store or retrieve information on your browser, mostly in the form of cookies. This information might be about you, your preferences or your device and is mostly used to make the site work as you expect it to. The information does not usually directly identify you, but it can give you a more personalised web experience. Because we respect your right to privacy, you can choose not to allow some types of cookies. Click on the different category headings to find out more and change our default settings. However, blocking some types of cookies may impact your experience of the site and the services we are able to offer.

These cookies are necessary for the website to function and cannot be switched off in our systems. They are usually only set in response to actions made by you which amount to a request for services, such as setting your privacy preferences, logging in or filling in forms. You can set your browser to block or alert you about these cookies, but some parts of the site will not then work. These cookies do not store any personally identifiable information.

These cookies allow us to count visits and traffic sources so we can measure and improve the performance of our site. They help us to know which pages are the most and least popular and see how visitors move around the site. All information these cookies collect is aggregated and therefore anonymous. If you do not allow these cookies we will not know when you have visited our site, and will not be able to monitor its performance.

These cookies enable the website to provide enhanced functionality and personalisation. They may be set by us or by third party providers whose services we have added to our pages. If you do not allow these cookies then some or all of these services may not function properly.

These cookies may be set through our site by our advertising partners. They may be used by those companies to build a profile of your interests and show you relevant adverts on other sites. They do not store directly personal information, but are based on uniquely identifying your browser and internet device. If you do not allow these cookies, you will experience less targeted advertising.

These cookies are set by a range of social media services that we have added to the site to enable you to share our content with your friends and networks. They are capable of tracking your browser across other sites and building up a profile of your interests. This may impact the content and messages you see on other websites you visit. If you do not allow these cookies you may not be able to use or see these sharing tools.